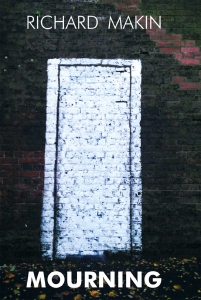 a novel, by Richard Makin

Order direct from Equus Press (paperback only); or via Amazon UK / US; or try the Kindle edition.

“The first two novels in Richard Makin’s trilogy started life being serialised in monthly parts online – in the best Dickensian tradition. But Mourning, like its predecessors, is no 19th-century novel. Without recognisable characters or plot, it continues to mine textual sources – science-fiction scripts, dictionary definitions, the languages of arcane ritual and of everyday life – achieving an astonishing non-narrative, never-ending coherence.” Ken Edwards

“The writing is that it is. This is prose you must learn to experience before you begin to interpret […] the pages in their beautiful and delirious abstraction are ordered poetry.” Iain Sinclair

“Opening with a necessary forgetting, this beautiful and disturbing book works through an accumulation of faltering incipits which force us, quoting Gertrude Stein, to ‘begin again and again and again.’ Owing much to Nouveau Roman particularity and the decadence of fin-de-siècle prose, privileging arcane objecthood over organised personhood, Mourning is richly dark and thick with corporeal and writerly materialities. It is also, as it recognises only partly with tongue-in-rectum, ‘screamingly funny in its own way.” Jeff Hilson

“Makin’s work is an experimental prose that connects, at its extremes, with both the novel and the installation.” Michael Peverett, Intercapillary Space

“Mourning is an extraordinary and distinct achievement. It is a demanding and enriching read characterized by highly wrought sentences, which cover a range of discourses and fictional events. It is not a conventional novel. There is minimal characterisation with no discernible plot other than recurring thematic issue. There is instead a succession of linked or partially connected beginnings, which echo and take the reader on endless journeys. ‘Noun a neuron. No index of terminations at the gallows gate.’” David Caddy, Tears in the Fence

“Richard Makin is a writer with a tempestuous relationship to language. His writing, whatever else it happens to be about, also has, at all times, itself as its subject. He writes urgently about the negligibility of language, of literature. His novels communicate hopelessness as to the possibility of effectively communicating.” Natalia Holtzman, Con-Text

Mourning is the final part of a trilogy by writer, poet and artist Richard Makin, following Work in Process (Great Works) and Dwelling (Reality Street).

Excerpts from Mourning have been published in VLAK, Golden Handcuffs Review, Frame & Reference, Hastings Online Times and In Conversation with Stuart Sutcliffe, and presented at The Waste Land Trilogy, London.

"It is the business of the future to be dangerous" // A.N. Whitehead

"Poetism is the crown of life; Constructivism is its basis" // Karel Teige

“I think we ought to read only the kind of books that wound and stab us. If the book we are reading doesn’t wake us up with a blow on the head, what are we reading it for?…we need the books that affect us like a disaster, that grieve us deeply, like the death of someone we loved more than ourselves, like being banished into forests far from everyone, like a suicide. A book must be the axe for the frozen sea inside us” // Franz Kafka, letter to Oskar Pollack, 27 January 1904
Loading Comments...
Comment
×
<span>%d</span> bloggers like this: