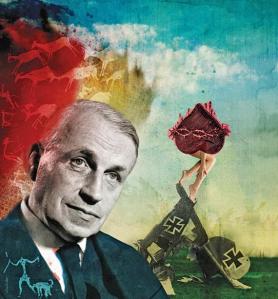 Georges Bataille (1897-1962) was a French writer whose multifaceted work is linked to the domains of literature, anthropology, philosophy, economy, sociology and history of art. In the 1920’s Bataille associated himself with the Surrealists, even though his opinions soon began to diverge from those of André Breton. Bataille’s life from early 1920s to mid-40s was a bizarre mixture of sporadic work, the frequent visiting of bordellos, and ill health – much of his later fiction and thought came to reflect on and process his way of life. He worked as a librarian at the Bibliothèque Nationale in Paris, then at libraries in Provence and Orléans, until his nightlife and his troubles with tuberculosis finally took their toll. His most famous works include Story of the Eye (1928), Inner Experience (1943), Erotism (1957) and Tears of Eros (1961).

"It is the business of the future to be dangerous" // A.N. Whitehead

"Poetism is the crown of life; Constructivism is its basis" // Karel Teige

“I think we ought to read only the kind of books that wound and stab us. If the book we are reading doesn’t wake us up with a blow on the head, what are we reading it for?…we need the books that affect us like a disaster, that grieve us deeply, like the death of someone we loved more than ourselves, like being banished into forests far from everyone, like a suicide. A book must be the axe for the frozen sea inside us” // Franz Kafka, letter to Oskar Pollack, 27 January 1904
Loading Comments...
%d bloggers like this: